I keep going hot and cold on writing. A lot of this has to do with the situations around my personal life right now. When I am overly stressed, I tend to write less. Right now, I have a lot going on. Overall, I am OK – just really busy. If I have not been visible in the community it is because my personal and work life have been my priorities.

This weekend was Bay to Breakers and I just needed to get the hell out of town. I didn’t want to be around all of the straight drunk people who invade SF and act like complete assholes. Given the number of Irish pubs in my neighborhood, you would understand. I decided to pack Matte up and head out to Death Valley.

1200 miles in 52 hours. I left SF at 4:30 pm on Friday and got home around 8 pm on Sunday evening. It really felt like the trip was longer, but it was really only a weekend trip. It was well worth it – even given the fact that I managed to wear out the chain on Matte this trip.

Otherwise continue down below here for how my trip went.

I left SF at 4:30 pm on Friday. To all of my East Bay friends who have to drive that commute, how do you deal with it? I would go insane even on two wheels having to do that daily. But the hardest part of the trip was getting out of SF on a Friday afternoon after being caught in endless conference calls.

Once I got to I-5 the boredom kicked in. I started listening to Queens of Adventure to kill the monotony of dealing with The Five (Hey now, I was heading in the direction of SoCal!). Somehow I managed not to crash Matte as I laughed at a bunch of drag queens playing DnD in front a live studio audience.

When I got to Bakersfield things were a mess. I booked a room at the Super 8 and when I arrived their computer system was down and external sites were overbooking them. On top of that, they also couldn’t make key cards and the manager had to let me in to my room. I ended up skipping grabbing a quick bite since it was late and I didn’t want to have to deal with the hassle of getting back in. When I started unpacking a few things, that’s when I noticed I forgot to put the SD cards into my cameras. After googling – I had an answer.

As I am walking around Walmart I can’t help but wonder – is shopping at a Walmart supercenter some of the rare forms of exercise people get? I forgot how massively huge they were. Eventually I found the memory card section. 25 bucks later I have two 16gb SD Sandisk Ultra cards and now I am on my way to find a quick bite to eat so I don’t blow my schedule too much. At this point playing it safe was in the cards and I went to Black Bear Diner. Once again, I forgot how big everything was there.

Once I hit the road, suburban America faded away. I rode 178 through the Kern River Canyon to China Lake and then past Searles Valley. In the future when I have more time, I want to take pictures all of all of the industrial buildings around Trona. There was something beautiful about the processing plants in the middle of the desert. This was going the be last gas until I got to either Stovepipe Wells or Panamint Springs, so Matte was filled up and I headed up north.

After crossing over into the Panamint Valley before entering the park, I made a wrong turn and went up Wildrose Road. While rough at first, it was all well within the realm of what Matte and I could handle. Then the road was washed out in a few places. No worries – I have now been off road enough to handle this and continued. When the pavement started to pretty much disappear and was starting to get past my skill level, I realized I was on the wrong road.

So what does a good Shiny do? Stop and take selfies!

Once I got back to 190 things were rather smooth and uneventful. When I arrived at the Death Valley sign – I wanted to get my typical selfie. Except there was a huge group of tourists taking pictures and after waiting five minutes I just had to get moving again and headed to the general store over in Panamint Springs to get some water.

That’s when I saw this cute doggo – well coyote. Of course the fun thing about being a motorcycle around wildlife is that you have no protection around you. So I kept my distance and observed him from afar.

Walking in to the general store starts the portion of my trip where people keep on saying to me “Aren’t you hot in that?” It seems that everyone who rides seems to understand perfectly when I reply “It’s not so bad if you keep moving.”

With my hydration pack refilled time to try and take that selfie again. This time there is someone setting up lighting equipment to take their selfies. Seriously, multiple tripods and lighting… *SMH* So I said fuck it and will get one on Sunday morning on the way out.

One of the reasons I decided to take such an epic weekend trip is that there was a front passing through. The sky was dynamic, much more so than I was expecting. There was even rain in the forecast. Since the Furnace Creek Inn had a check-in time of 4, I needed to kill some time and I rode up Scotty’s Castle Road and took in the sights of the rain coming in. This was a lovely sight.

I killed enough time that I decided it was time to head to Furnace Creek and check in. After stopping by the visitors center to check out if anything was new there and filling up Matte at some of the most expensive gas in California (I have a rule where I won’t let Matte get below half a tank when possible in the desert) I got to the inn.

The hotel was gorgeous! They finished a 100+ million dollar renovation and it shows. When I booked it, I was wondering if it was worth the cost they were asking for it. In a way, I felt like it was 25% more expensive than what I would expect elsewhere. But I see that as the staying in the middle of a remote national park tax. To me, it was worth it. After spending 8 hours on the road, it was nice to check in and have a relaxing evening. The valet tells me where to park Matte while I check in.

Upon checking in, the staff at the Hotel apparently were all trying to figure out how to pronounce my last name. Apparently this is the time of year the European tourists show up.

When I went to grab my bags off of Matte, there was a lady with a black lab service dog outside. And the cute doggo just started sniffing me and she says “He loves motorcycle racers.” After chatting for a bit I have to excuse myself since I wanted to get unloaded and out of my sweaty leathers.

It felt really good to take a crisp shower after being out on the road for 8 hours in the desert sun for 8 hours in full leather! Unlike last time, there were enough cold parts of my trip that I had to wear my leather jacket instead of the mesh jacket. After getting all refreshed and cleaned up getting some drinks at the lounge felt like the right thing to do.

My original goal was to have a nice dinner and head out for sunset pictures. But with the incoming rain, these plans were not going to hold true. I had these wonderful rabbit empanadas and the pan-roasted duck for dinner. 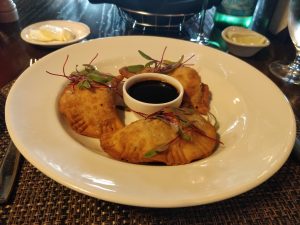 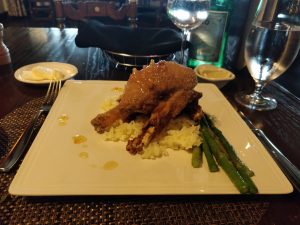 Dinner was very tasty. Once again, if I had to say anything negative, it felt like the prices were about 25% higher than I would expect for similar quality dish in SF or LA. But after traveling 600 miles in 24 hours, this hit the spot perfectly. Throughout dinner, I was watching the rain filter in over into the park and at this point I realized that I am probably not going anywhere for sunset pictures. Since there was enough debate about if it was making the ground or not – I decided to stay in. It was not worth getting caught up in a flash flood if it was enough to cause so.

Instead I took a short nap and headed back up to Scotty’s Castle Road to take some astro shots. I found a spot that I thought would work well for them. Unfortuantely it was really windy and I was pretty tired. Most of the shots did not come out since the moon was really bright. But a few gems did come out. 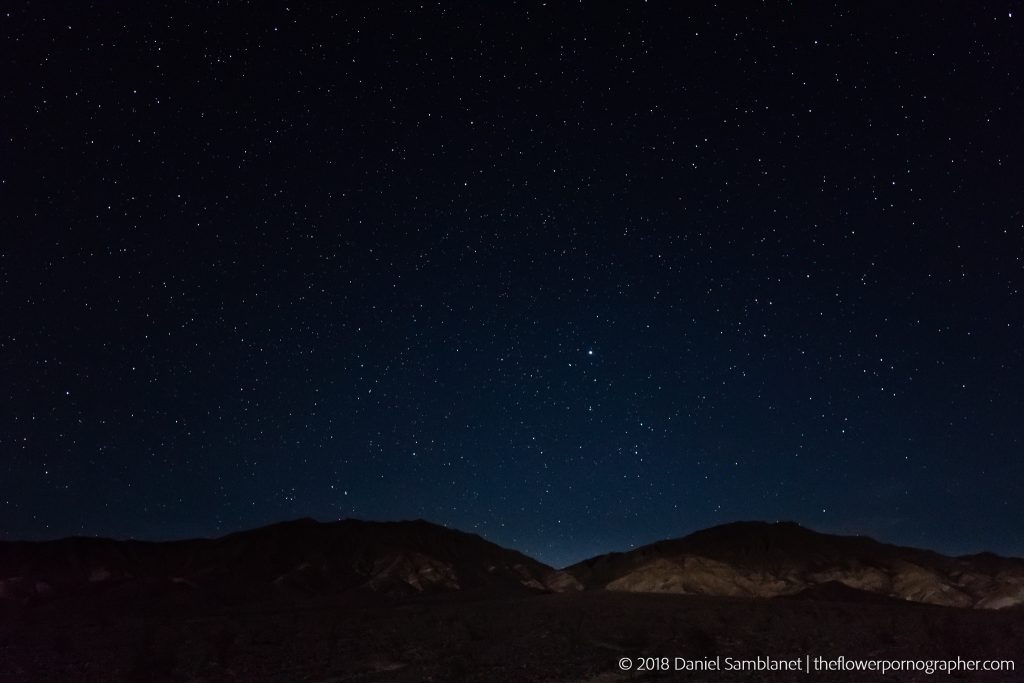 I also decided to try and take one of Matte. However, I was boneheaded and forgot to unplug the GoPro. Mars or a GoPro LED, what’s the difference? The focus still on the sky – so Matte may look a bit fuzzy.

Getting rest was more important than photos – so back to the inn I go. Sleeping was also more important than sunrise shots, as I had 600 miles to ride back home. My body was naturally up at 7 am. So I headed to the lobby got some coffee and breakfast. After a slow casual breakfast outside on the patio enjoying the views and nice morning weather, I packed everything up and was on the road around 9:30 am.

The route home I decided on was to head out of the park on 190 over to 395. At the junction of 190 and 136, there as a shot that really made the trip for me. Something about the intersection of the power poles, roads, and the Sierras in the background really hit it for me.

Then it was back to the Central Valley via 178 again. I have no complaints. Kern River Canyon is a fun place to ride. Nice fast sweeping curves to keep Matte happy. When I got to the other side of Bakersfield I found some wonderful road side Pupusas at Tita’s Pupuseria. And this is where I decided to take 58 over to 101.

58 was a great road, even when you factor in the 10 or so miles of repaving work they are doing. It was surreal to go past the oil fields in Kern County for it to transition to cattle ranches in San Luis Obispo County and then the California Solar Ranch. In a way, you could see how vast the industries in California are. And 58 was a good road too. A good mix of hilly and twisty to keep you on your toes without getting too boring.

Once I got to Paso Robles, the wind really picked up. Next thin I know it was 30-40 mph head winds all of the way to Salinas. It was no fun. By the time I got to San Jose, in less than 100 miles since my last fill up and inspected, the chain decided it was time to go. It really loosened up out of nowhere and it had the slack of an MX bike. While I managed to get home safely – I did call up the shop today to make sure Matte goes in to get it replaced.

All in all, this was a really fun trip. I’d do it again in a heartbeat.