This might have been the forgetful day of my road trip. The ride from Morro Bay to LA more or less was typical coastal and nothing really mind blowing. Even the food for the most part was nothing really special to write about. I had a good omelette for breakfast, but compared to the other food I had this trip – it blends in the background.

It was nice walking around the Santa Monica pier, but once again, nothing really special about it. Didn’t feel any different than the Santa Cruz pier. Although, it was fun watching the seagulls fight over a fish they stole from a fisherman.

Instead of going down 1 through Malibu, I decided that I was going to just stick to 101 and get to my hotel as soon as possible. Around Ventura, traffic picked up and I caught up to a a Gixxer who passed me earlier. I decided that to follow him as soon as we needed to split lanes, and what an introduction to LA Lane Splitting that was. Overall the drivers in LA are way better about dealing with motorcycles – and the bikers have a style that is way more aggressive. The whole time I never felt unsafe – not a single close call in the nearly 45 minutes of splitting we had to do.

Eventually I lose him as he heads off for the 405. Eventually I get to my hotel, 1 hour earlier than the google maps prediction. I stayed at the Park Plaza Motel over in La Brae. It came out to around 135 for the night, which is pretty cheap for that part of LA. Honestly, it worked out perfectly for me. When I checked in, they noticed I had a motorcycle and told me to park it in one of the “reserved” spaces up front that they typically reserve for the large suites.

After I showered, I did a walk over through the Grove and then over to West Hollywood. Part of me has been wanting to check out the main gayborhood in LA for a while and I decided to just hit up Hamburger Mary’s for dinner, which was solid. Overall, there is something just missing form all of the gayborhoods lately. Things seem formulaic now. 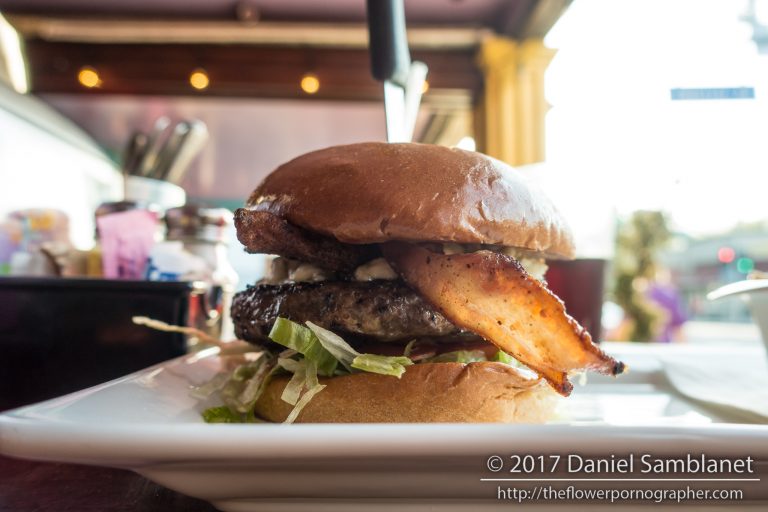 Afterwords, I walked up and down Santa Monica Boulevard and stopped in a few bars. The one thing I noticed is that most people were a few ticks more friendly than SF. Maybe this is because I have the fresh meat factor, but it seemed easier to strike up a meaningful conversation. Then I grabbed a Lyft and headed over to the Eagle LA. Once again, the same trend was there. It was also nice to just sit out in the patio there with a beer and not have to worry if I needed a hoodie.

The one thing that really worked well was leaving Matte alone at the hotel and walking around. Even though the first two days didn’t have much riding, it was good for my body to stretch and move around.

I am pretty sure I could adjust to the LA weather. There was something just right about the temperature range for me. Not too hot, not too cold. I need to check out LA more. Each time I end up there, it goes up higher as a place I my want to move to in the future.