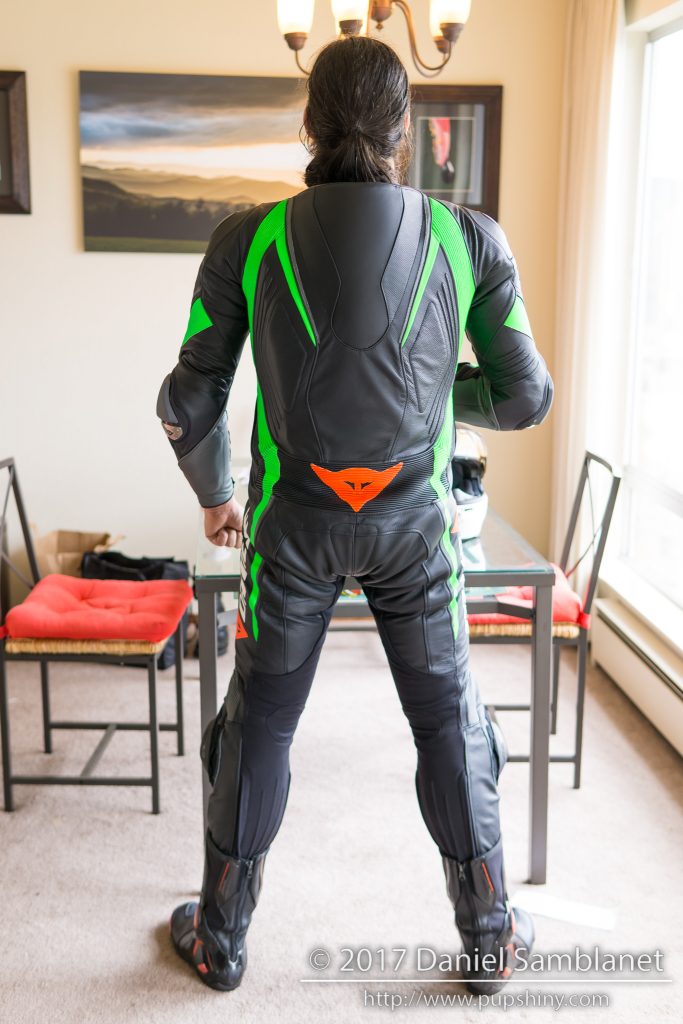 Earlier this week, I found a deal on the Dainese Aero Evo suit that was too hard to pass up as a gear head. So I jumped on it and it arrived this morning. During an all hands call I was listening to, I decided to try and get in. It was an experience getting the suit zipped up the first time. At first I feared that I would have to return it since it was not zipping up. Then I remembered you have to bend over like you are in a full tuck on the bike.

Got one side up, success! Now the other zip was fighting me. After finding some cord to use as a zipper pull, I got the it all zipped up. I was thinking to myself, I really hope this works since the next size up was out of stock and I would have to return and pass up on the deal if it didn’t fit. Next step was to zip up the calf zippers and put my boots on. Somehow I managed to get it on while the chatter of corporate goals and visions continued on in the background.

The sensation of the skin tight leather and armor was just amazing. I knew it would be a tight fit, but I felt like I could take anything that could happen to me. But walking and standing was hard. I know this is an aggressively cut motorcycle race suit, but it really was starting to feel like a bondage experience just trying to move around. But once I sat down and put myself in a position that I would be in on the bike, and it started to feel better.

I know from my other Dainese gear that it will break in a bit and the leather will stretch. The bottom half feels like the Delta Pro pants I bought after losing weight, and those were nearly impossible to get on at first. Now, they fit just perfectly. So my fear in ordering the wrong size was misplaced. Now I just sat around listening in to the corporate chatter while covered in this.

Eventually I decided I needed to make sure things fit with the back protector in, and had to get out. And this is were panic strikes, I didn’t think I could wiggle my way out alone. Uhoh. My left arm is stuck and I am just trying to shake it free. I wish I had a camera running since it must have looked funny, but then my left arm frees up and I am out! I realized I will need to wear some compression gear under it until it breaks in.

Once the call ends, I take care of some odds and ends for work, install the back protector, put on some leggings and a compression shirt, and get back in. It was much easier the second time after spending an hour in it. It was clear that it was starting to mould to my body. At this point I take some selfies. I know, a shock, right? 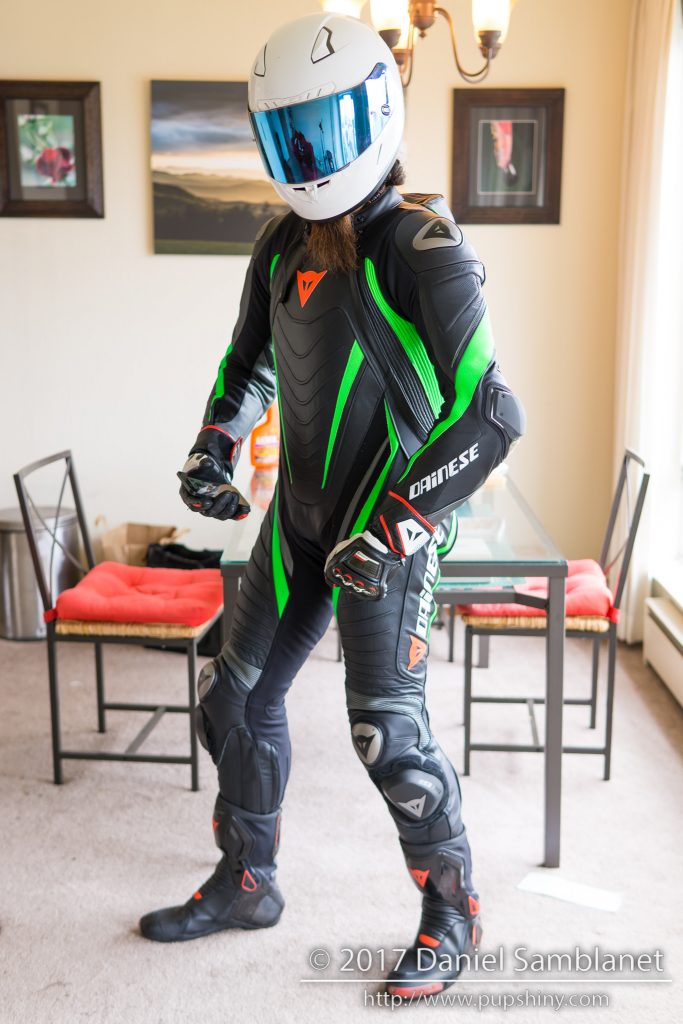 I head downstairs, setup the camera to take some shots with me on the bike to make sure things fit right when used for it it was meant for. The literal second after my leg was thrown over Matte, everything just hit right and felt natural. Then I put myself in a tuck. Even though this is an aggressive suit, any normal position on my bike was at home for it. While it may be a bondage like experience off the bike, it was worth it. And looking at the selfies of myself, I really felt like me. 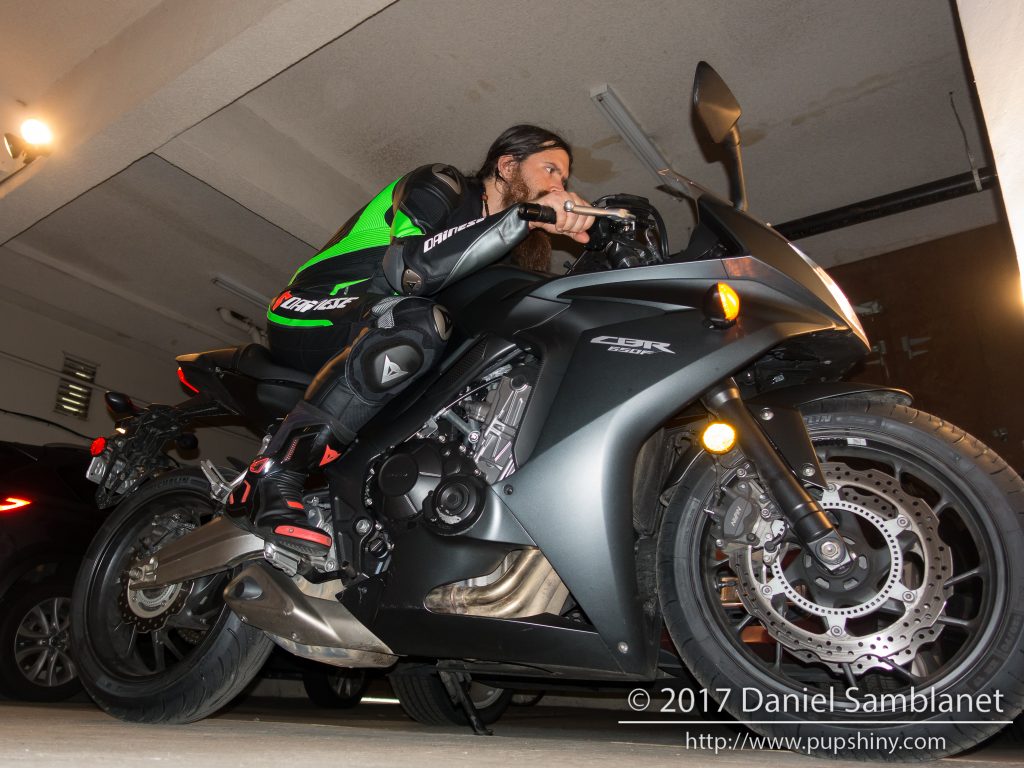 Now it is lunch time, so I get out of it, change into jeans, then head out to hunt and kill something. While thinking about it over lunch, it feels like I have gotten both a physical and spiritual second skin. I know over time it will physically form around my body. I can’t explain why, but this piece of gear was already starting to make a spiritual connection with me and I want to explore it more.

I really want to know, what is different about this one piece suit vs my pants and jacket that zip together to form a two piece suit?

Now I can’t wait until Saturday when I am going to ride around the North Bay and break in the suit along Highway 1 and other twisty roads. Let’s start forming these connections close and expand them further. I bought Matte to go explore, I didn’t think it was going to make me start exploring my spiritual side again – that will be a topic of a different post.